How To:  Categorize, Analyze and Report Project Construction Delays

Construction Delays are unplanned events that happen during both work planning and execution that result in a cost and/or schedule variance to the original project plan.  Delays can impact your project cost and extend your project delivery schedule.

Delays may also result in litigation if there is a dispute over who was responsible for the project delay – so it is critical to capture, analyze and resolve project delays quickly, and know who is responsible for each delay.
Capturing, assessing and reporting on delays is a standard project management process to manage the unplanned events that happen during the planning and execution of any major project.

This 1-Page summary in our Project Controls series gives you a downloadable quick Reference Guide on the fundamentals of construction delays and a cheat sheet of the widely accepted categories for delays, and methods to assess delays.

This article will cover:

What You Need to Manage Construction Delays:

1. A Project Plan with your Critical Path

Your project plan will include your project’s scope, schedule, and costs. Project plans may also include resource loading and a quality plan.

Project Managers use tools like Oracle Primavera P6 or Microsoft Project to create their resource-loaded project schedule (or they simply use an Excel spreadsheet to organize their project – though managing projects in Excel can quickly become a headache). Project Managers will also integrate these tools with other software packages during work execution for daily progress tracking, delay tracking and timesheets.

You are not planning for a delay to happen on your project, but when it does you need a form at the ready to capture the details of the delay. Capturing delays in a standardized way at the point where the delay actually occurs (especially for field delays during execution) is important when it comes to assessing the delay, in particular who was responsible for the delay.

Having a standard way to capture every construction delay and report on those delays when found to project stakeholders can save Contractors a lot of time and money, avoid major headaches with the Owner and potentially avoid the risk of expensive litigation. And if you do end up in litigation, you want to have clear objective evidence of the details of every delay.

There are 4 generally accepted categorizations for delays:

You want to identify if the delay is on the critical path – because if it is, the delay is going to extend your project’s completion date and will require you to update your project plan. Critical delays need to be resolved immediately. Being alerted through an email notification or some other method when these delays happen and formulating a plan to resolve the delay as quickly as possible is very important for successful project execution.

Depending on the type of delay you encountered and the criticality of the delay you may want to record a non-conformance around the delay and plan corrective & preventative actions to avoid another occurrence of that delay. You may additionally need to update your risk profile for the project if there’s potential a similar delay may happen as the project progresses.

Non-critical delays still need to be captured, but they do not necessarily impact the project delivery date. They may still have a cost impact so they also need to be reported on and resolved.

The contract between the Contractor and the Owner will typically specify what delays are excusable and which ones are not – so it is important that you are familiar with the language of the contract!

Some examples of excusable delays:

Not all delays are excusable – some examples of non-excusable delays:

Disputes over whether or not a delay is excusable or not can cause major headaches on a project, so it is important the contract language is clear and delays are discussed with the Owner as soon as they are encountered on the project. Having a detailed, documented record of every delay and agreement between the Owner and Contractor as to who is responsible is crucial if there is ever a dispute potentially leading to litigation – document your delays!

Excusable delays may be compensable and again this would typically be specified in the contract between the Owner and the Contractor.  Some examples of compensable delays:

The important point is that these types of delays are within the Owner’s control, so they shoulder the responsibility for the delay occurrence.  Some examples of non-compensable delays:

These types of delays are not within the control of the Owner or the Contractor; how they are handled then typically comes down to the specific case and how that is described in the contract language.

Concurrent delays are when two delays happen at the same time, each independently affecting the project completion date – and the question becomes which delay is responsible for any delay in the project delivery.

Again it is important to read the contract language and understand who is responsible.

Here’s a flow diagram summary of the different delay categories: 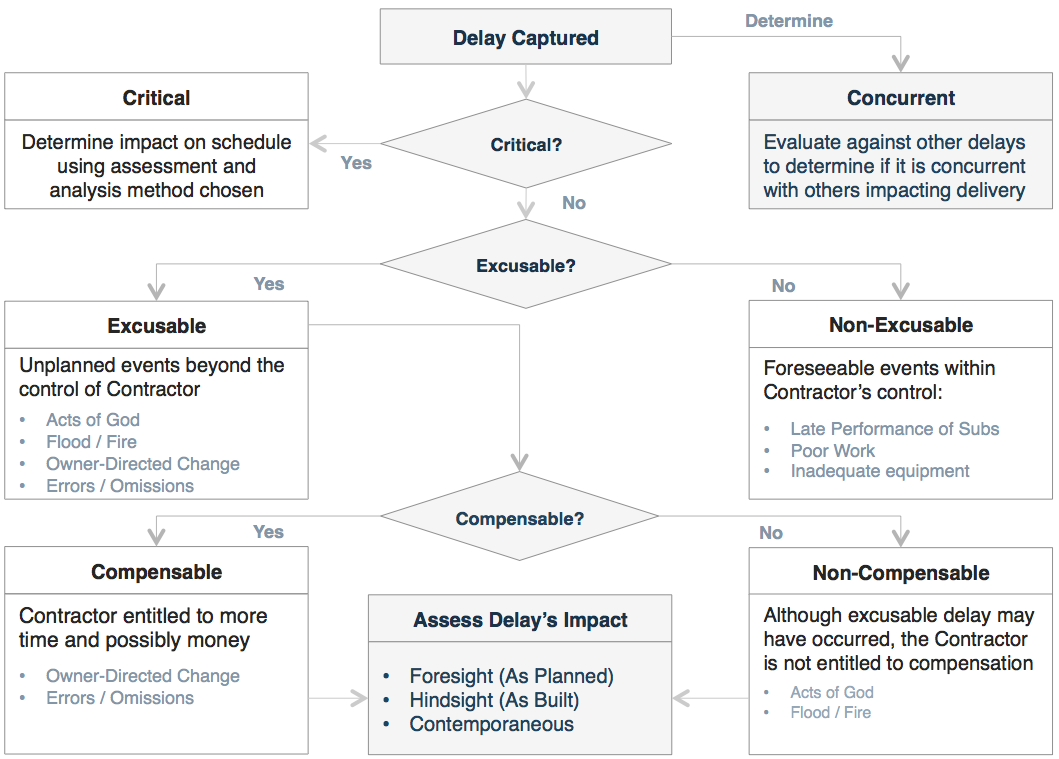 Depending on the scope and complexity of the project you may use a different analysis method for evaluating the impact of the delay on the project:

This method looks ahead at the plan for completion before the work is actually done and is often referred to as the Impacted As Planned Method.

In this method delays are added into the as-planned / project baseline schedule and the forward looking project completion date is re-calculated based on those new items added in.   Views of delay activities added in may focus only Owner or Contractor delays.

This method is simple however it ignores the as-built history of the project and assumes the as-planned schedule doesn’t change moving forward.

The basis of this method is that delays are best analyzed from the end of the project looking back at what happened. This analysis method is often referred to as the Collapsed As-Built Method.

The objective of this method is to evaluate the delay against the current critical path for the project, to determine the impact of that delay on delivery (if any) or is it accounted for in the float of the ongoing activities at that point in time.

This method gives the most accurate analysis of the true impact of delays on project schedule and takes into account the dynamic nature of the critical path through project execution. That said it’s a time consuming method to implement for a project, so consider the project needs.

Stakeholders need a view of the delays that have occurred and this is done through a delay log, which captures the important points of every delay recorded. Your delay capture method should tie back in to your delay log so that the assessment and analysis can happen.

This covers the basic concepts of construction delays, including how to categorize delays, different methods to assess the impact of delays on schedule and the need to report on delays to keep stakeholders in the loop.  Good delay capture and documentation can save a lot of headache and difficult meetings between the Owner and Contractor – so make sure to well document your delays.

Download the Construction Delays Reference Guide, print it off and take it with you so that you always have at your fingertips of the basics of delay categorization.

Learn how you to improve your delay capture and reporting using PTAG’s secure mobile field data collection software and get started today! 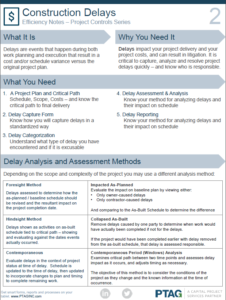 This site uses cookies. By continuing to browse the site, you are agreeing to our use of cookies.

We may request cookies to be set on your device. We use cookies to let us know when you visit our websites, how you interact with us, to enrich your user experience, and to customize your relationship with our website.

Click on the different category headings to find out more. You can also change some of your preferences. Note that blocking some types of cookies may impact your experience on our websites and the services we are able to offer.

These cookies are strictly necessary to provide you with services available through our website and to use some of its features.

Because these cookies are strictly necessary to deliver the website, refuseing them will have impact how our site functions. You always can block or delete cookies by changing your browser settings and force blocking all cookies on this website. But this will always prompt you to accept/refuse cookies when revisiting our site.

We fully respect if you want to refuse cookies but to avoid asking you again and again kindly allow us to store a cookie for that. You are free to opt out any time or opt in for other cookies to get a better experience. If you refuse cookies we will remove all set cookies in our domain.

We provide you with a list of stored cookies on your computer in our domain so you can check what we stored. Due to security reasons we are not able to show or modify cookies from other domains. You can check these in your browser security settings.

These cookies collect information that is used either in aggregate form to help us understand how our website is being used or how effective our marketing campaigns are, or to help us customize our website and application for you in order to enhance your experience.

If you do not want that we track your visit to our site you can disable tracking in your browser here:

We also use different external services like Google Webfonts, Google Maps, and external Video providers. Since these providers may collect personal data like your IP address we allow you to block them here. Please be aware that this might heavily reduce the functionality and appearance of our site. Changes will take effect once you reload the page.

The following cookies are also needed - You can choose if you want to allow them:

Leave us a Message